My one-month presence in Bulacan has validated the culture and arts programs of the Provincial Sports, Youth, Employment, Arts and Culture Office of the Provincial Government of Bulacan. Headed by the veteran artist and community arts organizer Armand Sta Ana, the Arts and Culture Division has encouraged the widespread projects all over Bulacan. Armand told me that some of the projects are artist-initiated already. The Provincial Government was just there to spearhead and implement culture and arts projects in the past. But now, artists start to create their own projects in partnerships with the office. With my visits, interviews and meetings with local arts groups in different places in Bulacan, Armand commented that he didn’t realize how much his programs have reached to artists groups.

It is good to note that the Provincial Government of Bulacan has really allotted budget for culture and arts development in Bulacan. Hence, one could really feel the active culture and arts scene in the province. In my one-month stay in Bulacan, only few days where I was vacant – I always had events to watch or to observe.

As a performing artist and head of arts group in my area, I am so inspired to hear stories such as :
1. a community theater group that rehearses in the middle of the streets – and is still surviving until now

3. a community theater group that work and create projects in two distant towns – but still able to manage the two areas

4. a community theater group that continues to stage experimental and controversial performances without getting paid and working on their own budget with the belief of changing society – and is still existing until now

6. a folk dance company that was able to record an instructional video materials of their dance repertoires

7. a loosely organized visual arts exhibit group that provide venues for young artists to showcase their works amidst the huge pool of veteran painters in Bulacan

There are still so many stories that has touched and inspired me to improve my own work in my own community.

Hearing the story of Barasoain Kalinangan Foundation, Inc (BKFI) has inspired me also. Their success story of being a struggling theater to being a professional theater now has given me the hope that with better visions, directions and planning professional theater can really be achieved in my area. 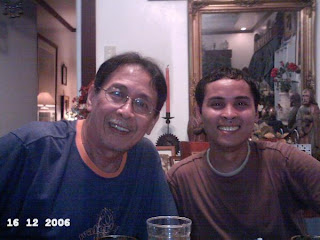 NON-VERBAL THEATER WORKSHOP
The immersion has also given me the opportunity to work on the initial development of the Non-Verbal Theater Theater Workshop that I am currently trying to develop. My short workshop sessions with my host group, BKFI, has given me the jump off point in making the workshop model.

I was also able to create a 15-minute Untitled non-verbal play with the Uhay members of BKFI. That for me was a good test and try of the workshop model that I am developing. I am only saddened that I didn’t have more time to explore this model with BKFI, as they are also busy with the regular Theater Laboratory sessions.

ISSUES AND CONCERNS
I still think that a one-month immersion is not enough to fully understand the whole community. An immersion grantee cannot fully implement or do a project in a span of one month, unless, the interest of the program is just for artist to be an observer of the cultural and arts scenario of the community.

MY ASSESSMENT OF THE PROGRAM
Ugnayan sa Sining is a wonderful community arts immersion project. It gave opportunities for both the artist and the community to learn and share skills and knowledge in arts and community organizing. It became a platform for the artist to learn how other artist groups and communities run and managed their cultural and arts programs. It is a good opportunity to also share skills and techniques to the visited community.

The immersion gave me good source of inspiration in cultural and arts programs. Having experienced the vibrant culture and arts scene in Bulacan, I went home to Zamboanga del Sur – Pagadian City with a huge inspiration and rich experience. Thus, in a span of one month after returning from the immersion, I was able to formally establish the kaZAulogaN – Zamboanga del Sur Artist Network, a network group that I started conceptualizing since February 2006 – but could not just put a focus to it. Now, it is now a solid network of artists in the province that had created projects already.

RECOMMENDATIONS AND HOPES FOR THE FUTURE
I recommend that this program should continue, so that many region-based artists can also benefit from this program.

I also recommend to make the immersion period longer – say for a period of 2 months.

I also hope that the CCP will give me the opportunity to further develop the non-verbal theater workshop module that I started during my immersion with BKFI.

Day 31 : Workshop with TEARKA in Calumpit

In the afternoon, I agreed to meet Mark Anthony Lodrigito, the Artistic Director of Teatro ng Artistikong Kalumpiteňo (TEARKA) in Malolos. He then brought me to Calumpit to meet with his group and conduct a 3-hour workshop session. 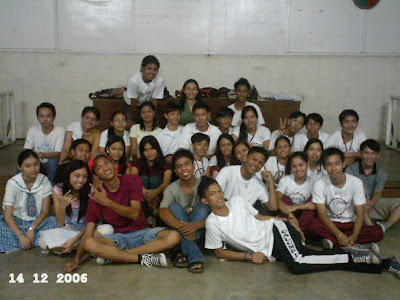 I introduced basic practice of nonverbal theater to a group of almost 30 students. Since the venue was too open and big for the group, it was difficult to contain the focus and attention of the participants. But as soon as the session progressed, the participants took on the exercises well. Some even went beyond my expectation for a very crush workshop.

I spent overnight in Calumpit.
Posted by Felimon BLANCO at 2:00 PM

I went to CCP to help Outreach Division in the annual Sopas, Sining at Sorbetes. This was my 2nd time to join this event. Last year, I also joined with Hobart Savior, while on our way to Singapore to perform. It was fun working with the kids. Role of the day was SORBETERO! Yes, I helped in giving ice cream to kids of more than a thousand. Fun and tiring. But worth the time and effort.

From CCP, I made my adventure finding the way to Bustos from Manila. I took Baliwag Transit from Cubao. When I reached Baliwag, Fernan Tadeo picked me up there. Fernan is the Artistic Director of Dalubhasaan ng mga Giya ng Sining at Teatro ng Artista ng Bayan (DAGITAB). 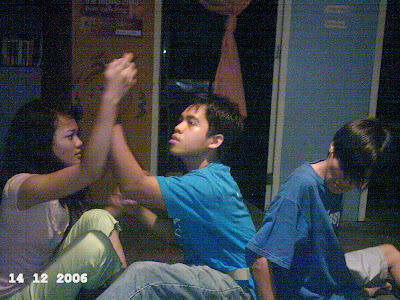 It was already past 9pm when I reached Bustos, Bulacan. DAGITAB has a nice little office. At 10pm, we started the workshop session. I introduced some exercises on physical theater and nonverbal theater. They were very eager to learn the new performance technology that I shared with them. They took on all the exercises interestingly and faithfully in the middle of the night. We ended the workshop sessions at 3:30am. Still very proactive, we discusses until 4:30am.
Posted by Felimon BLANCO at 2:00 PM

Today, I watched a piano and violin concert at the Hiyas ng Bulacan Convention Center in Malolos City. 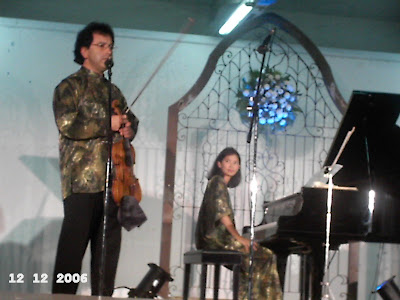 The audience were treated with beautiful piano and violin music from different masters from different parts of the world. Of course including Philippines! Not that I am so nationalistic but my favorites of all the pieces that were performed were the music composed by Filipino musicians : A. Espino’s Recuerdo Variations – a piece based on Jovita Fuentes’ Ay Ay Kalisud and F.Buencamino’s Mayon Fantasy. Or maybe because I can easily relate with the music.

The concert ended with bravo applause from the members of the audience. They are truly an amazing music concert duo.

This national circuit tour is made possible through the Outreach Division of the Cultural Center of the Philippines. The Bulacan concert was sponsored by the Provincial Government of Bulacan through the Provincial Youth, Sports, Employment, Arts and Culture Office and the Pamanang Bulacan Foundation, Inc.

Posted by Felimon BLANCO at 2:00 PM No comments:

Today was my rest day. I needed this rest day.

I just stayed at home and read the coffee table book Bulacan Lalawigan ng Bayani at Bulaklak.
Posted by Felimon BLANCO at 2:00 PM

I joined Direk Arman and Rene Villanueva in judging SIBUL’s Lantern Making Contest in Barangay Canalate. From there, I observed the theater lab workshops of BK.

In the evening, Direk Arman brought me to Manila and observed the meeting of Luzon Theater Network. They were planning for the Luzon Opening event of National Arts Month 2007, which Malolos will host in February 3.

I met the theater leaders from Luzon. Thanks to Arman.
Posted by Felimon BLANCO at 2:00 PM